Nanded (pronounced Nander), formerly in Hyderabad State is now a district town in Maharashtra. It is a railway station on the Manmad-Secunderabad section of South Central Railway. One of the five Sikh Takhts is located here and the Sikhs reverently refer to it as Hazur Sahib. Nanded is associated with the first and the last of the Sikh Gurus. While Guru Nanak Dev passed through it during his extensive travels which took him as far south as Sri Lanka, Guru Gobind Singh spent the last few days of his earthly life here. He arrived here with emperor Bahadur Shah towards the end of August 1708, and, while the latter went on to Golconda after a few days rest, the Guru decided to stay on here. It appears that he had followed the emperor through Rajasthan to Deccan in the hope that justice would be meted out to his persecutors and murderers of his young sons and numerous Sikhs, as perhaps promised by the emperor at Agra. But finding that for over one year the emperor had been avoiding the issue and had shown no inclination to punish the culprits, the Guru was disappointed and decided to part company with him. Here he found a man of destiny and promise in a Bairagi Sadhu whom he baptized with Khande di Pahul (renaming him Banda Singh) and commissioned to go north, marshal the Sikhs in Punjab and dispense justice as deserved by the perpetrators of crime in the past, the faujdar of Sirhind, Wazir Khan being the most deserving among them. Meanwhile, Wazir Khan had not been sitting idle or complacent. Aware of the rapport established between the Guru and the new emperor, he realized the possibility of harm to himself through royal action or retribution. He, therefore, hired two assassins to pursue the Guru and eliminate him at the first opportunity that offered itself to them. They got their chance there at Nanded when one of them stabbed the Guru, and although both of them were themselves killed on the spot, the Guru, too, did not survive the wound. He breathed his last there but not until he had formally passed on the spiritual light of Guruship to Guru Granth Sahib, the Shabad-Guru of the Sikhs for ever thereafter. All historical Gurdwaras at and near Nanded, except one dedicated to Guru Nanak Dev, are associated with the activities of Guru Gobind Singh during the forty odd days of his stay here. All the Gurdwaras are connected by road to the central shrine, the Takht Sahib and the management arranges hired-transport to take pilgrims around to them.

“The Eternal Father willed and I raised the Panth. All my Sikhs are hereby ordered to accept the Granth as their Preceptor. Have faith in the holy Granth, as your master and consider it the visible manifestation of the Gurus. He who hath a pure heart will seek guidance from its holy words.” 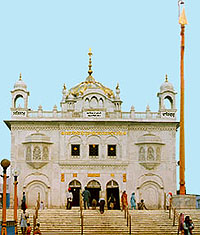 These are the words uttered by the the tenth Guru Sri Gobind Singh, before his death on October 7, 1708 at Nanded in Maharashtra. At the site where the Guru breathed his last, was built a Gurdwara between 1832 and 1837, under instructions from Maharaja Ranjit Singh. It is called “Sachkhand Sri Hazur Abchal Nagar Sahib”. It is a two-storey building. The architectural design resembles that of the Golden Temple. It’s’ interior is artistically ornamented in the style of Harmandir Sahib, Amritsar. The walls of the inner room called Angitha Sahib have been covered with golden plates On the first floor, recitations from Sri Guru Granth Sahib, go on day and night. The dome is polished and on the pinnacle is the kalash made of gold plated copper.

Some of the sacred relics of Guru Gobind Singh are also preserved here. These are, a golden dagger, a matchlock gun, an archer with 35 arrows, two bows, a steel shield studded with precious stones and five golden swords.

Takhat Sachkhand Sri Hazur Abchalnagar Sahib is the principal shrine at Nanded. It marks the site where the Guru had his camp in 1708 A.D. after the departure of the emperor Bahadur Shah. The tenth Guru held his court and congregation here. It is the site of his own tent where he was convalescing after he was attacked by assasins. It is the place from where the tenth Guru rose to heaven alongwith his horse Dilbag.

In 1708 being prescient of the end of his earthly role, the Guru had despatched Banda Singh with five of his Sikhs to Punjab and Mata Sahib Devan under a separate escort to Delhi before the stabbing incident. He told the rest of his retinue to retire to their homes if they so wished, but he bade one Bhai Santokh Singh to stay on here and keep Guru ka langar going. many others also chose to remain. Together they built a room over the platform where the used to sit while holding his court and installed Guru Granth Sahib on it. They called it Takhat Sahib. Guru Gobind Singh, while conferring Guruship on the holy Book, had himself named Nanded as Abchalnagar (lit. steadfast city) after the first word of a hymn read at random on the occasion. Sachkhand (lit. region of Truth) had been used by Guru Nanak Dev to mean the abode of God. The present building of the Takhat Sahib was got constructed by Maharaja Ranjit Singh with money, artisans and labour sent from Punjab during early 1830s. Around the same time the Nizam of Hyderabad raised a contingent of Northern Sikhs as part of his army. Most of these men settled permanently in Hyderabad State. Many militant and righteous Hindus embraced Sikhism in the 18th century. The control of Takhat Sachkhand Sri Hazur Sahib, which had formerly passed into the hands of Udasi priests was regained by the Sikhs under the influence of the Singh Sabha Movement of the late nineteenth century. Some of the rituals and ceremonies connected with working are peculiar to this Takhat Sahib. In 1956 an Act was passed by the legislature of Hyderabad under which the management of Takhat Sahib and other histoorial Gurudwaras was legally placed under a 17 member Gurudwaras Board and a five member Managing Committee.

The building complex of the Takhat Sahib about half a Kilometer from the left bank of the river Godavari is spread over several hectares. Besides the Takhat Sahib proper it also includes two other shrines, Bunga Mai Bhago ji comprising a large room where Guru Granth Sahib is seated and some historical weapons are at display, and Angitha (lit.place of cremation) Bhai Daya Singh and Dharam Singh. These two survivors of the battle of Chamkaur, who were among the Panj Piare (Five beloved Ones who had offered their heads at the Guru’s call when the Khalsa was created in Kesgarh Fort of Anandpur Sahib on the Baisakhi Day of 1699), had accompanied the Guru to Nanded and had died here subsequently. The complex also has a 300 room rest house for pilgrims, Guru ka langar, and office blocks of the Gurudwara Board besides a press and publishing house and a school for scripture-reading and kirtan.

The two-storey building of the Takhat Sahib proper standing on a high base has a small sqare room on the second floor bearing the gilded ribbed dome topped with a tall gilded pinnacle and umbrella shaped finial. There are some rooms in the basement too, so that the edifice is technically four-storeyed. Corners of the roof of the first floor are decorated with domed kiosks on octagonal pedestals. Other embellishments on the exterior included oriel windows and a wide coping on the sides and a fancy fencing on the roof top. Inside, the sanctum has marble lining decorated with inset work in floral patterns on lower parts of the walls and stucco and tukari work on the upper parts as well as on the ceiling. The sanctum is not occupied by Guru Granth Sahib during the day as is normally the case in all Gurudwaras. Here some old weapons and other relics are placed on a marbled platform. This include steel quoits, a broad sword, a steel bow and an arrow, a gilded dagger-sized sword, a few swords and a mace. Guru Granth Sahib is seated in the room in front of the sanctum from early morning to late evening and is placed in the sanctum only during the night.

This historical shrine is situated on the bank of the Godavari river and is visited by thousands of devotees throughout the year from all over India and abroad. It is one of the five Takhts (thrones) of the Sikhs and is much venerated by them. Here took place in the first week of September, 1708, the conversion to Sikhism of a Bairagi Sadhu Madho Dass, who under a new name of Banda Singh Bahadur, gave a sharp turn to the history of the Sikhs. It was this great hero who in the next seven years (1709-1715) shook the Mughal empire in the north-west to its very foundation and paved the way for the liberation of the Punjab in 1764-65.

Besides Gurdwara Sachkhand Sahib, other Gurdwaras at Nanded are Sangat Sahib, Shikar Ghat, Nagina Ghat and Hira Ghat. These too were built in memory of visit of Sri Guru Gobind Singh to this place.

The inside central room is called Angitha Sahib  where Guru Gobind Singh was cremated. This Gurdwara is one of the five Takhts (Seats of Authority) of the Sikh faith. Guru Gobind Singh ended the physical Guruship before his departure from this world and passed on the permanent Guruship to Sri Guru Granth Sahib on  October 6 , 1708. He declared that the temporal functions of the Guru will be performed by the Five Beloveds. The spiritual guidance will be given by Sri Guru Granth Sahib.

“Whosoever wishes to find (Behold) God, let him search Him in Sri Guru Granth SahibWhere ever five Sikhs are assembled together, there will I be present”.

Guru Gobind Singh  did not appoint any human successor in line of human Guruship as per tradition. The Guru declared Granth Sahib to be the ultimate preceptor and the Guru-Eternal for the Sikhs. He conferred Guruship  on Granth Sahib at Abchal Nagar Nanded by circumambulating five times and bowing his head before it. He declared that after him, the living Guru would be embodied  in the Sabad (Word) as contained in Sri Guru Granth Sahib by uttering the sermon:

It was from here that Banda Bahadur was sent to Punjab to fight for righteous cause. It is a  repository of  Weapons of Guru Gobind Singh which are exhibited  for Darshan of the visitors.

Following are the other Gurdwaras which are around Sri Hazur Sahib.