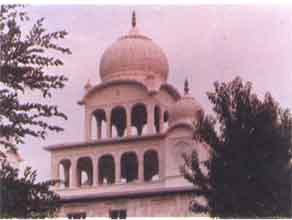 In the summer of 1620 A.D. Guru Hargobind visited Kashmir. A Manji or the seat of Sikh mission was established at Srinagar in Guru Amar Das’s time. The contemporary masand or the incumbent incharge of the Manji was Sewa Das. His old mother, Mai Bhagbhari had sewn a gown for the Guru, with her own hands and cherished a wish that the Guru should wear it in front of her eyes. It was the magnetism of Mai Bhagbhari which drew Guru Hargobirid to Kashmir. On reaching Srinagar the Guru met Sewa Das and many more Kashmiri devotees. They received him with great love and devotion. The mother of Sewa Das touched the feet of the Guru. The Guru asked her to bring the gown she had made for him and put it on. The joy of Mai Bhagbhari knew no bounds.

The Guru stayed at Srinagar for nearly three months. He held congregations. delivered discourses and left the place only after he had supervised the last rites of Mata Bhagbhari and had thus immortalised her. At Srinagar Guru Hargobind expounded the thesis that the Guru’s treasure chest is for the benevolence of the poor.

Gurdwara Chhevin Patshahi – Srinagar, on the bank of Jhelum River and Dal Lake, was visited by Guru Nanak Dev and Guru Hargobind, and according to some source by Guru Har Rai, too, but the historical Sikh shrine here is named after Guru Hargobind alone. Called Gurdwara Chhevin Patshahi, it is located outside Kathi Gate of Hari Parbat Fort. This is the site of the house of Mai Bhagbhari, who had long been yearning for a glimpse of the Guru when Guru Hargobind fulfilled her wish by his visit. The Gurdwara comprises a rectangular hall with the sanctum in the middle and a spacious terrace in front. An old well nearby is said to have been got dug by Guru Hargobind himself. Srinagar is accessible by road via Pathankot and Jammu and also by air from Delhi and Chandigarh.

During stay at Srinagar, Guru Hargobind built a shrine at Hariparbat, appointed Bhai Sewa Das its incharge, asked him to live there and preach the true faith. This shrine is visited by thousands of devotees, who go to Srinagar during the summer season.

Srinagar is not only a place of pilgrimage, but a health resort also, it has a great attraction for tourists both indians and foreigners. it is connected by road to Delhi and other states through Jammu and Pathankot. Jammu is the railhead for J &. K and the Airport is in Srinagar. Besides hotels, visitors have the facility of house boats. The Shikara ride in the Dal lake is great temptation for tourists