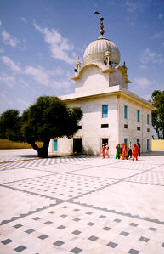 Gurdwara Tibbi Sahib is associated with the Tenth Guru, Guru Gobind Singh Ji. This place is situated in sandy terrain at a height (tibbi means a small hillock). Guru Sahib chose this place to stay on reaching Muktsar as it provided a very good view of the area. When the battle between the Forty Muktas and the Mughals was in progress, Guru Ji helped his sikhs by shooting arrows at the Mughals from this place. The birthdays of Guru Nanak Dev Ji, Guru Gobind Singh Ji and shahidi purab of Guru Arjun Dev Ji are celebrated with great fervour here. Besides, the Magh Mela is organized on the 12th and 13th of January to commemorate the sacrifice of the Forty Muktas. Diwali and Baisakhi are also celebrated with enthusiasm.

Gurdwara Tibbi Sahib is located on the outskirts of the city of Muktsar on the Guru harsahai-Muktsar bypass road. It is three kilometers from Gurdwara Tuti Gandi Sahib.